Two recent books published you should check out. 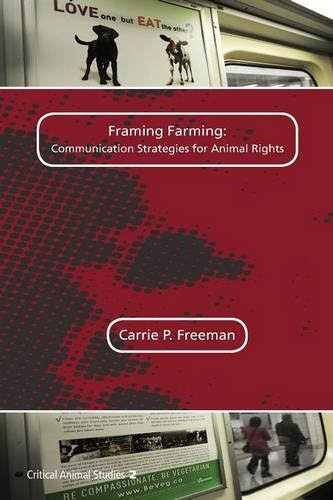 "To what extent should animal rights activists promote animal rights when attempting to persuade meat-lovers to stop eating animals?

Contributing to a classic social movement framing debate, Freeman examines the animal rights movement’s struggles over whether to construct farming campaign messages based more on utility (emphasizing animal welfare, reform and reduction, and human self-interest) or ideology (emphasizing animal rights and abolition). Freeman prioritizes the latter, “ideological authenticity,” to promote a needed transformation in worldviews and human animal identity, not just behaviors. This would mean framing “go veg” messages not only around compassion, but also around principles of ecology, liberty, and justice, convincing people “it’s not fair to farm anyone”.

Through a unique frame analysis of vegan campaign materials (from websites, to videos, to bumper stickers) at five prominent U.S. animal rights organizations, and interviews with their leaders, including Ingrid Newkirk and Gene Baur, Freeman answers questions, such as: How is the movement defining core problems and solutions regarding animal farming and fishing? To which values are activists appealing? Why have movement leaders made these visual and rhetorical strategic choices – such as deciding between appealing to human self-interest, environmentalism, or altruism? To what extent is the animal rights movement actually challenging speciesist discrimination and the human/animal dualism?

Appealing to both scholars and activists, Framing Farming distinctively offers practical strategic guidance while remaining grounded in animal ethics and communication theory. It not only describes what 21st century animal rights campaigns are communicating, it also prescribes recommendations for what they should communicate to remain culturally resonant while promoting needed long-term social transformation away from using animals as resources."

Carrie P. Freeman is an Associate Professor of Communication at Georgia State University in Atlanta. Her scholarship on media ethics, activist communication, and representation of animal rights issues has been published in over 15 books and journals. A vegan and grassroots activist for almost two decades, she currently hosts radio programs on animal and environmental protection on WRFG-Radio Free Georgia.

Religious arguments for animal rights and liberation are fairly common in the literature on the animal question and the animal condition. Meanwhile, arguments considering animal liberation from a deliberately secular perspective are virtually nonexistent. In Animal Liberation and Atheism: Dismantling the Procrustean Bed, Kim Socha initiates the conversation by exploring how the concept of religion is inherently antithetical to animal liberation. She also challenges secularists to view the world differently, free from religion's cultural baggage. Finally, Animal Liberation and Atheism is a call for everyone to consider developing a system of ethics disengaged from anthropocentric and speciesist mythologies so that needless violence against all beings and the environment may diminish.

Kim Socha, Ph.D., Indiana University of Pennsylvania, is the author of Women, Destruction, and the Avant-Garde: A Paradigm for Animal Liberation (Rodopi: 2011) and is a contributing editor to Confronting Animal Exploitation: Grassroots Essays on Liberation and Veganism (McFarland Publishing: 2013) and Defining Critical Animal Studies: A Social Justice Approach for Liberation (Peter Lang: 2014). She has also published on topics such as Latino/a literature, surrealism, critical animal studies, and composition pedagogy. Kim is an English professor and activist for animal liberation, drug policy reform, and transformative justice.
Posted by Scu at 2:13 PM