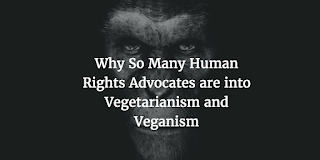 Even worse was that all societies formed for the protection of the Rights of Man, all attempts to arrive at a new bill of human rights were sponsored by marginal figures-- by a few international jurists without political experience or professional philanthropists supported by uncertain sentiments of professional idealists. The groups they formed, the declarations they issued, showed an uncanny similarity in language and composition to that of societies for the prevention of cruelty to animals. No statesman, no political figure of any importance could possibly take them seriously. --Hannah Arendt, The Origins of Totalitarianism, p. 292.


There is a Vice article going around. One I hesitate to link to, because it is so obviously clickbait. Meant to both troll those who are vegans and vegetarians, while also causing us who are to defend ourselves against it, and share it again. These kinds of articles are frequent for this very reason. And it remains one of the reasons your vegan and vegetarian friends are, perhaps, a little touchy (remember).  But here's a link anyway. The Vice article, written by Alexis de Coning, argues that there is a strange history of white supremacists being vegan or vegetarian. To which I say, that's true, sometimes. She also ends by arguing, "To combat these racist movements, we must understand them, including how they can incorporate beliefs we usually associate with liberal or leftist politics. The diversity of this movement should not be underestimated." To which I fully agree. However, the history here is far more complicated than de Coning presents in this article, and certainly more so than the clickbaity title and blurb.

Let's begin with what should we even do if it turns out that vegetarianism and veganism are central to fascism. As Derrida responded to such a claim in For What Tomorrow...:


The caricature of an indictment goes more or less like this: "Oh, you're forgetting that the Nazis, and Hitler in particular, were in a way zoophiles! So loving animal animals means hating or humiliating humans! Compassion for animals doesn't exclude Nazi cruelty; it's even its first symptom!" The argument strikes me as crudely fallacious. Who can take this parody of a syllogism seriously even for a second? And where would it lead us? To redouble our cruelty to animals in order to prove our irreproachable humanism? (68).

It does seem silly, as I put it once, to go punch an animal in the face to prove you love humanity. Perhaps this argument is only useful to combat the people who claim that veganism magically makes you into a saint. But I think anyone who has belonged to the community for a while knows that basically every kind of person can become vegans. Assholes, saints, misogynists, feminists, racist, humanists, etc. It is, almost certainly, interesting to see why different people are drawn to veganism. As I argued in my Dark Animal Studies paper (a title I wish I could change), the draw of veganism for many people is the promise of purity, for many ethical purity. Boria Sax famously argues that the obsession with animal protection laws and vegetarians among the Nazis was a way of reducing everything to the biological and the natural. After all, the Nazis outlawed the hunting of wolves even though there were no wild wolves left in Germany. Such an action is purely symbolic. But this explains why the Nazis were also supporters of environmentalism. They were invested in a movement of blood and soil, so animals and the environment were to be protected as an extension of the hypernaturalization of the Nazi world. And while there does continue to be some neo-nazis who advocate veganism, there is no real sense in the Vice article about how much of the White Supremacy movement today is promoting veganism. Is this a fringe within the fringe? There is no proof that this is centralized, or a major part of the right trying to co-opt liberal or leftist discourses. Furthermore, there is as much as history, if not more so, of Nazis supporting environmental issues, and still occasionally doing so, especially through discussions of population controls. And no one thinks that environmentalists need to really argue that environmentalism is not thoroughly Nazi ideology.  And while the headline talks about white supremacy, that is certainly overstating things. While there were some high profile members of the Nazi party who supported animal protections (including, arguably, Hitler himself), you don't see similar things going on with Italian, Japanese, or Spanish fascisms. And while you continue to see pro-animal support in Nazi inspired mysticism and occasionally neo-nazi movements, you don't see this as being a part of the rhetoric of, say, the KKK. This seems to be an issue with exactly one (horrifying) historical moment, rather than something connected to either fascism or white supremacy as a whole. And if that's how we are playing the game, then the pro-human rights people being pro-animal rights is far more common trope.

As the epigraph from Hannah Arendt attests to, this remains a long history between those fighting for human liberation, and those fighting for animal liberation. Gandhi, famously, became interested in anti-capitalist and anti-imperialism through his time spent eating at Vegetarian Society meetings (as Leela Gandhi explains in her book Affective Communities). Carol Adams reminds us that early feminism and vegetarianism were often put together.


We can follow the historic alliance of feminism and vegetarianism in Utopian writings and societies, antivivisection activism, the temperance and suffrage movements, and twentieth century pacifism. Hydropathic institutes in the nineteenth century, which featured vegetarian regimens, were frequented by Susan B. Anthony, Elizabeth Cady Stanton, Sojourner Truth, and others. At a vegetarian banquet in 1853, the gathered guests lifted their alcohol-free glasses to toast: "Total Abstinence, Women's Rights, and Vegetarianism."(156, but see all of Chapter Nine).

Henry Bergh founded both the American Society for the Prevention of Cruelty Toward Animals, and a similarly named organization to advocate on behalf of children. And I could name any number of other examples. Let me go google antifa and veganism. One second, stay around. Oh shit, Trevor Noah called antifa "vegan ISIS." I didn't even know that, but that's how much the movement is associated with veganism.

Look, the issue is not that veganism will magically make you against fascism and white supremacy. I wish it would. But there is a long history of people promoting human rights, and being opposed to fascism, who were also supporters of animal liberation. That is as much of our history as the Nazi stuff is. We do, of course, always need to be sure our veganism is intersectional, and opposed to these white supremacists. But the idea that there is something anti-human well-being at the heart of animal rights and environmentalism has got to end. As I have said before, the issue is that we all engage in partial sympathies. So rather than see sympathy as a fundamentally limited resource that decreases the more one uses it, we should see it as something that can be expanded, and become more powerful. The challenge still remains, what institutions, what practices,  and what aesthetics can we create to extend our partial sympathies. This is the task that remains to all of us.
Posted by Scu at 1:32 PM