Some Long Awaited For Philosophical Titles

This is one of those times where it seems that several long awaited for academic books from France are coming out in English. Some of these are translations of works that have been in French for decades. Others are titles that have only have recently been released in French, but were in the archives of the authors instead.

1. Michel Foucault--History of Sexuality, Vol. 4: Confessions of the Flesh. 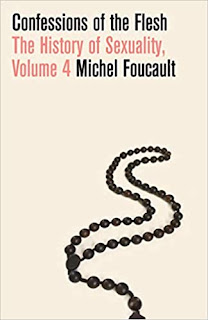 If you are interested in why the long delay of the fourth volume of the History of Sexuality, along with a good review of the book itself, I highly suggest reading this review from Stuart Elden.
But here is the summary from the book:


Brought to light at last--the fourth volume in the famous History of Sexuality series by one of the most influential thinkers of the twentieth century, his final work, which he had completed, but not yet published, upon his death in 1984.
Michel Foucault's philosophy has made an indelible impact on Western thought, and his History of Sexuality series--which traces cultural and intellectual notions of sexuality, arguing that it is profoundly shaped by the power structures applied to it--is one of his most influential works. At the time of his death in 1984, he had completed--but not yet edited or published--the fourth volume, which posits that the origins of totalitarian self-surveillance began with the Christian practice of confession. This is a text both sweeping and deeply personal, as Foucault--born into a French Catholic family--undoubtedly wrestled with these issues himself. Since he had stipulated "Pas de publication posthume," this text has long been secreted away. However, the sale of the Foucault archives in 2013--which made this text available to scholars--prompted his nephew to seek wider publication. This attitude was shared by Foucault's longtime partner, Daniel Defert, who said, "What is this privilege given to Ph.D students? I have adopted this principle: It is either everybody or nobody." 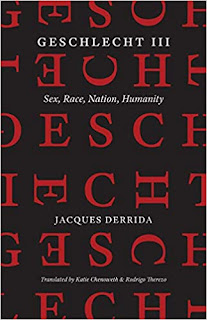 This is the third, out of four, Geschlecht works, and it was recently recovered in Derrida's archive. The first one, "Sexual Difference, Ontological Difference," and the second one, "Heidegger's Hand" (which is important for us animal scholars), can both be found in the second volume of Psyche. Geschlecht IV, "Heidegger's Ear" can be found in the collection Reading Heidegger. (One more quick note is that the new set of Derrida lectures, Life Death, is also forthcoming).


A significant event in Derrida scholarship, this book marks the first publication of his long-lost philosophical text known only as “Geschlecht III.” The third, and arguably the most significant, piece in his four-part Geschlecht series, it fills a gap that has perplexed Derrida scholars. The series centers on Martin Heidegger and the enigmatic German word Geschlecht, which has several meanings pointing to race, sex, and lineage. Throughout the series, Derrida engages with Heidegger’s controversial oeuvre to tease out topics of sexual difference, nationalism, race, and humanity. In Geschlecht III, he calls attention to Heidegger’s problematic nationalism, his work’s political and sexual themes, and his promise of salvation through the coming of the “One Geschlecht,” a sentiment that Derrida found concerningly close to the racial ideology of the Nazi party.
Amid new revelations about Heidegger’s anti-Semitism and the contemporary context of nationalist resurgence, this third piece of the Geschlecht series is timelier and more necessary than ever. Meticulously edited and expertly translated, this volume brings Derrida’s mysterious and much awaited text to light.


3. Gilles Deleuze--Letters and Other Texts 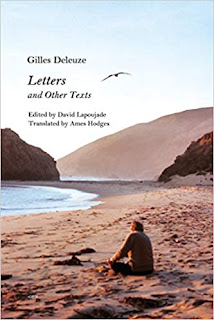 This is the third collection of shorter Deleuze works edited by David Lapoujade (following up Desert Islands and Two Regimes of Madness).


A posthumous collection of writings by Deleuze, including letters, youthful essays, and an interview, many previously unpublished.
Letters and Other Texts is the third and final volume of the posthumous texts of Gilles Deleuze, collected for publication in French on the twentieth anniversary of his death. It contains several letters addressed to his contemporaries (Michel Foucault, Pierre Klossowski, François Châtelet, and Clément Rosset, among others). Of particular importance are the letters addressed to Félix Guattari, which offer an irreplaceable account of their work as a duo from Anti-Oedipus to What is Philosophy? Later letters provide a new perspective on Deleuze's work as he responds to students' questions.
This volume also offers a set of unpublished or hard-to-find texts, including some essays from Deleuze's youth, a few unusual drawings, and a long interview from 1973 on Anti-Oedipus with Guattari.


4. Gilbert Simondon--Individuation in Light of Notions of Form and Information, and Volume II. 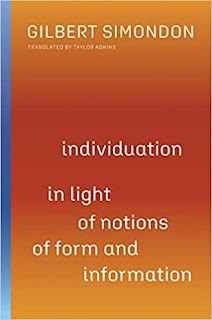 5. Édouard Glissant--Treatise on the Whole-World AND Introduction to a Poetics of Diversity AND The Baton Rouge Interviews. 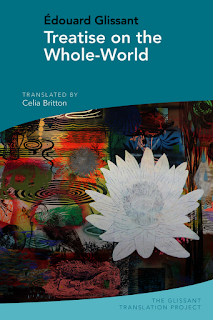 6. And a German one, Theodor Adorno--Aspects of the New Right-Wing Extremism 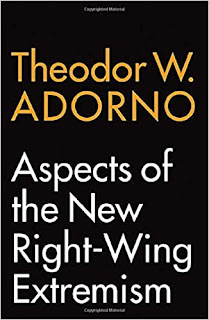