The Sophist Socrates and Other Heresies

I've been teaching Classical Rhetoric this semester, and I have become convinced of something I have long believed. Not just convinced, but really discovered that for anyone who studies this stuff, it seems to be an obvious truth (so obvious in the literature, I almost decided not to write this post).  Namely, that Socrates was a sophist. 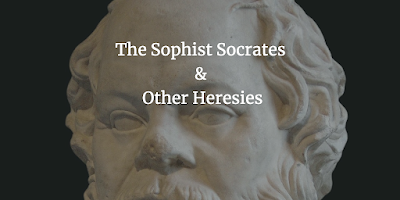 What is the evidence of this?
(1)Well, first, the term itself was widely and generally used. In Aristides Orations 46 he tells us that sophist was "a general term," and tells us that Solon, Pythagorus,  Socrates, even Plato, were called sophists. The term itself seemed to have meant something like sage, and applied to all sorts of people, including rhapsodes and other poets, learned leaders, prophets and seers, philosophers, and the like. But it also had an ambiguous meaning, in which the term could both be used as a compliment or an insult. Edward Schiappa tells us to think of term like "intellectual" today, and Robin Reames tells us to think of the term like "elite." So it just wouldn't be that surprising that Socrates was seen as a sophist. I mean, it would be weird if he wasn't. But if you need other evidence.
(2) Famously Socrates is a sophist in Aristophanes' The Clouds, who runs his own Thinkery. I have seen people call this depiction a mistake, unfair, and inaccurate. While it is clear there are plenty of inaccuracies (Socrates did not charge for lessons, and he was not particularly interested in the cosmos) it doesn't seem to be a mistake, but rather a representation that was widely agreed upon.
(3) In the Protagoras, we can see Socrates acting like a sophist. And in Plato's The Apology, Socrates is actively defending himself from being seen a sophist.
(4) In Xenophon's Memorabilia he writes, "Now Critias bore a grudge against Socrates for this; and when he was one of the Thirty and was drafting laws with Charicles, he bore it in mind. He inserted a clause which made it illegal “to teach the art of words.” It was a calculated insult to Socrates, whom he saw no means of attacking, except by imputing to him the practice constantly attributed to philosophers, and so making him unpopular." Now it is clear that Xenophon disagrees that Socrates teaches the art of words (logôn technê), but it is also clear that it was widely understood that he did.

Okay, so there is ample evidence that Socrates was considered a sophist. That he, along with the other Athenian born sophist Antiphon, were put to death partially because they were sophists. That indeed, it would have been weird if Socrates was not considered a sophist. But I haven't proved he was a sophist, because I have been using the term generally. But I have not defined it, and then tried to show that Socrates matches that definition. Which raises the next question: If Socrates was so widely seen as a sophist at the time, why do we tend to see him as an anti-sophist now?

Several years ago here I wrote two blog posts defending the sophists, and arguing that they were engaged in a pluralistic metaphysical project (you can see them here and here. Robin Reames also has an interesting article contending Protagoras was devoted to a project of becoming, which you can read here). The terms I used in those posts--eristic, antilogy, and dialectic--were all invented by Plato. In the 90s, Thomas Cole and Edward Schiappa sought to show (among other things) that rhetoric was also a term invented by Plato (see Cole's The Origins of Rhetoric in Ancient Greece and Schiappa's Protagoras and Logos). You can read their arguments yourself to decide if they are convincing, but it seems clear at least to me that the term rhetoric (a) was an invention of 4th century BCE, not 5th, and (b) really fits into how Plato worded words. If so, it is Plato's Gorgias that this term is first introduced (interestingly, the work carries a second title, Peri rhêtorikês--Concerning Rhetoric--and it is at least possible this second title originates with Plato). Why does it matter? Well first, the usual claim that the sophists were ones who taught rhetoric, as opposed to the philosophers, would certainly not have been understood during the time period of the Older Sophists, because the word rhetoric was not in use. They did teach logos, but of course, so did Socrates. So what was at stake was a move by Plato to distinguish what he was doing (and Socrates) from other intellectual schools. (The exact relationship of Plato to rhetoric is certainly complex, and I highly suggest Reames' nuanced treatment in Seeming and Being).  As Schiappa argues Plato was engaged in a project of dissociation. Long excerpt coming:

As Charles L. Stevenson has noted, many of Plato's dialogues can be described as promulgating persuasive definitions: "The purport of the definition is to alter the descriptive meaning of the term, usually by giving it greater precision within the boundaries of its customary vagueness; but the definition does not make any substantial change in the term's emotive meaning." One of the rhetorical objectives of the dialogues was to dissociate the usual or "commonsense" usage of a term such as "knowledge," "justice," or "sophist" from what Plato believed should be the correct usage. Thus, by giving the terms "sophist" and "philosopher" more precise technical meanings and portraying his characters as more or less attractive-depending on the objective of the dialogue-Plato provided a favorable emotive and technical meaning for "philosophers" and a negative emotive and technical meaning for "sophists." [...] Perelman and Olbrechts-Tyteca have suggested that rhetors rarely offer dissociations in isolation. Rather, "the philosopher will establish a system that will lead essentially to the relating of the various philosophical pairs with each other." (Protagoras and Logos, p. 8).

So, Plato's dialogues on the sophists is an attempt at dissociation, to take something that would have been grouped together in the reader's head, and show that they are actually distinct. Our understanding of Socrates as opposed to the other sophists is not because of how far apart he was from them, but because of how close he was. To put it in less generous terms, Plato was engaged in a branding campaign. And branding campaigns requires us to know why the competition is different and worse. This becomes obvious when you realize the goal here is not just to rescue his teacher from bad reputation of the sophists, but to help promote the Academy against his rival, Isocrates. It is, for example, regularly assumed that the target of the Phaedrus was Isocrates, who used written down speeches to help teach. Indeed, Isocrates never claimed to teach rhetoric and instead called what he taught philosophia, which one assumes had to infuriate Plato. it makes sense that a discipline that still involves argumentation, thought experiments, technical and precise distinctions, requires that a regular claim that they are not sophists! And while branding requires making precise distinctions between things that seem alike, it does not necessarily mean the branding is a lie or incorrect. Those distinctions might matter, and it very well could be that all the distinctions that Plato marshals to make Socrates different from the other Older Sophists are exactly the key and important distinctions. But for us, we should remember that the teaching of logos was not seen as a rival of philosophy, and that those trying to adhere to such strict distinctions might be trying to sell us something.