Today is the 20th anniversary of the death of Gilles Deleuze. The LA Review of Books has put together six essays reflecting on Deleuze today. My particular favorite among them was Brian Massumi's. The essay is remarkably strong about tracing the importance of Deleuze on thinking about thinking so that we may produce concepts otherwise. But it also contained this very funny paragraph about the success of Deleuze:


Fast forward to the present. Deleuze is one of the most cited authors around. He is everywhere, to the point that Deleuze fatigue is palpable in many quarters. One is as apt to hear his surname preceded by “The Church of” as by “Gilles.” The publication of scholarly volumes whose titles begin with “Deleuze and …” has reached industrial proportions. The “minor” figures Deleuze drew on have been rediscovered, largely through his work, and each has spawned a mini-industry of its own (with the exception of Ruyer, and he is coming). The Deleuze Studies journal is finishing its ninth year, and the annual international conference associated with it is preceded by a weeklong “Deleuze Camp.” Seriously. It is actually called that.

As I said on facebook, when I was younger I belonged heavily to the Church of Deleuze, nowadays I am more more like high holidays Deleuzian, culturally Deleuzian. I like the music, you know? But I also want to spend a few minutes to talk about what Deleuze meant for me.

He was the first thinker I became obsessed about. I encounter Anti-Oedipus when I was 18, and taking my first philosophy class, Contemporary French Philosophy, taught by Jason Wirth. The summer between my first and second year of college was very brutal and hard for various personal reasons, and I engaged in the same coping mechanisms I use to this day. Namely, I threw myself into working through hard philosophy. I picked up a copy of A Thousand Plateaus from Barnes and Nobles, and did my best. I didn't, couldn't, read it cover to cover. But I took their permission seriously that I could pick and choose chapters. It would not be an exaggeration to say I spent the rest of undergrad, and no small part of grad school, writing various papers that simply meditations on Deleuze, regardless of what I was actually assigned. In one of my first papers for grad school, which was Kafka, the law, and animals I was told by the professor that I could not just parachute Deleuze in at the end of my paper to save the day. When I got married, we ended up with a groom's cake that was made to look like my copy of ATP (it was a very good wedding). 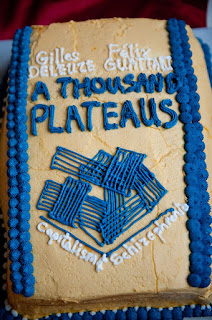 There are lots of things that drew me to Deleuze, but the most important parts, the parts that have stayed, are the lessons I learned about how doing philosophy and the task of thinking. Deleuze wrote again and again that philosophy is a practice of experimentation and experience over interpretation. I was free to play around in Deleuze's backyard because I was told it wasn't a matter of getting it correct, it was a matter of producing something worth thinking. While scholarship and rigor are perhaps important standards for philosophy, for Deleuze it was provocation, production, and potency. Philosophy mattered to the degree it was able to do something. So many different kinds of doing: making weapons, clearing paths for fleeing, making demonic alliances, producing a new people and a new earth, harming stupidity and cliches, creating concepts. Deleuze presented the task of philosophy in its grandiosity, but it always democratic and egalitarian, and suspicious of major, royal, and macro interpretations. While dominate institutions may wish to put philosophy to its own work, philosophy and thinking always are the weapons of the oppressed, of the minors who are excluded from majoritarian images of thought. Philosophy was for the peoples and races who could not find themselves within the reflections of the world around them. Deleuze didn't always get it right, but you always knew what side he wanted to be on, and you always knew what side he felt philosophy served.

There are reasons that I often call myself a recovering deleuzian, or make other jokes distancing me from his work. There are lots of ways I no longer find myself in his writings. However, his understanding of philosophy is still my own, and I am still pretty happy that the epigraph of this blog comes the last work co-authored with Guattari. "The agony of the rat or the slaughter of a calf remains present in thought not through pity but as the zone of exchange between man and animal in which something of one passes into the other." - What Is Philosophy?
Posted by Scu at 8:01 PM