Today would have been Deleuze's 97th birthday. Here is a short homage of him I wrote several years ago. Today I also got in a new copy of A Thousand Plateaus. I got my first copy, and until now my only copy, May of 2001. So, that copy is now old enough to drink. And it is falling apart, tons of notes and underlinings. It has seen things. Cameron Kunzelman told me that the Bloomsbury editions were nice sizes, good font size, etc. (actually, seems he told the world!) So I ordered one from the UK, and waited for it to randomly appear. Today is the day! I got the new copy because I decided I wanted to read the book again from cover to cover. Despite being a book that has inspired me a lot, I haven't read it cover to cover since early in grad school. There are chapters I return to again and again, and a few I have barely touched. So, I am going to move through it. Nothing special, about a chapter a week. My goal right now is to post reflections and impressions on each chapter as I go through. Maybe you will want to read along. 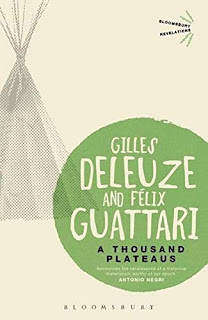 The Truth Is Not Out There: William James and the verification of truth 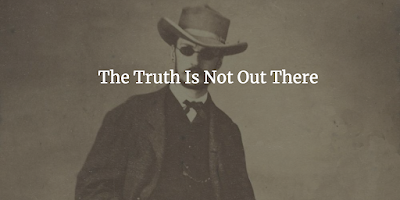 Over at his blog, Michael Huemer has a recent post dealing with, among other things, pragmatism and its conception of truth. I don't know Huemer's work in general, but I am familiar with his writings on ethical vegetarianism and veganism, but most likely some of his other work might provide better background here. So I am going into this ignorant of any of his arguments about epistemology or metaphysics, sadly.

This leads him to point on the first blog post I linked to,

So let's talk about William James. First of all, James agrees. Sorta. As he says in ch. 6 of Pragmatism:

Truth, as any dictionary will tell you, is a property of certain of our ideas. It means their 'agreement,' as falsity means their disagreement, with 'reality.' Pragmatists and intellectualists both accept this definition as a matter of course. They begin to quarrel only after the question is raised as to what may precisely be meant by the term 'agreement,' and what by the term 'reality,' when reality is taken as something for our ideas to agree with. .

Okay, so we agree that reality and our ideas have to be in agreement, but, uhm, we are actually going to disagree about all those terms and how we do that. So, James argues a little further down in the same chapter his famous claim that truth is verification and validation:

The moment pragmatism asks this question, it sees the answer: True ideas are those that we can assimilate, validate, corroborate and verify. False ideas are those that we cannot. That is the practical difference it makes to us to have true ideas; that, therefore, is the meaning of truth, for it is all that truth is known-as.
This thesis is what I have to defend. The truth of an idea is not a stagnant property inherent in it. Truth happens to an idea. It becomes true, is made true by events. Its verity is in fact an event, a process: the process namely of its verifying itself, its veri-fication. Its validity is the process of its valid-ation.

So when Huemer says your statement that all cats are green if, and only if, all cats are actually green, we have to take a step back and figure out what it means to say something is green in reality? Remember this? 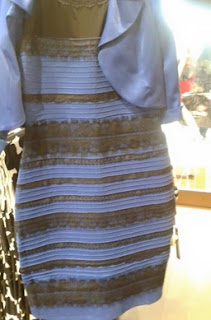 Is the dress blue and black or white and gold? The correspondence theory of truth might say something like: if you went and saw this dress in the original, it is clearly white and gold, so it is true to say it is white and gold, and false to say it is blue and black. But, to paraphrase Magritte, ceci n'est pas une robe. The question is not what color is the original dress itself, but what color is the dress in this picture. Is color in the eye of the beholder? Does it belong solely to the image? Is color produced through some sort of interpretative community? The pragmatist, under the right conditions, could accept the as true that this image of the dress is white and gold, or blue and black, or even both. The condition for the answer requires us to first decide what processes of verification and validation we are engaging in. James again:

Pragmatism, on the other hand, asks its usual question. "Grant an idea or belief to be true," it says, "what concrete difference will its being true make in anyone's actual life? How will the truth be realized? What experiences will be different from those which would obtain if the belief were false?

Now when we get to issues of verification, or what beliefs make different, we are no longer according to Huemer, really talking about truth.

Another possibility is that people confuse the idea of the meaning of “truth” with the idea of a criterion for telling when something is true. Hence you get coherence or ideal inquiry theories of truth.
I’m fine with asking these other questions. “What beliefs do you approve of?” and “How can you tell when something is true?” are better discussion questions than “What is truth?” But you shouldn’t just reinterpret the latter question as meaning one of the former. Making huge confusions like this just makes it hard to get the right answers to anything. If you want to answer one of the more profound questions, instead of claiming to be giving an account of truth, just say, “Look, the nature of truth is a boring question. Instead, let’s talk about what beliefs one should approve of …”

But for the Jamesian pragmatist believes if you don't answer what we are corresponding to in the correspondence theory of truth, the whole thing is question begging. Let me give one of my favorite examples, the placebo. Does a placebo work? As I argued in that previous post, if you are a patient, and you are given the placebo, and the placebo works, in what way can we say that the placebo didn't make you feel better? Did that not happen in reality? Is that not true? But what if you are working to create a drug trial, there is another mode and experience of the placebo. Another process of verification and validation. Then, of course, we can say the placebo does not work, it does not treat. So the mode within which you are engaging the placebo matters dramatically about whether it is true, or not. This why James says that truth happens to an idea, that it is an event. We can't simply say, is an idea true or false until we also say under which processes of verification. Let's take a different example. We are beset by various problems that large parts of both our country and the world are simply in denial about. And it is common in certain Democratic discusses of global warming or covid to say something like, we should do what the science tells us. This statement is baffling, because it basically combines at least two different processes of verification. Science, including perhaps social sciences, can tell us things like how big of a potential problem we are facing, what are some of the possible solutions, maybe what some of the solutions are. What science cannot do is to tell us what to do, how much risk we should take, what trade offs we are okay with. You can affirm these second set of questions are about truth without undermining the first set of truths (the scientific ones), because are just dealing with two different processes of verification and validation. This is why James might something like (though not exactly) usefulness matters to truth. Usefulness is one of the ways we can figure out what process of verification we are engaging in. James' committed pluralism is on full display here. This not a position where anything gets to be true, but there are as many truths as there are processes of verification. The Truth Is Not Out There.