Ontological Pluralism in Placebo and Nocebo 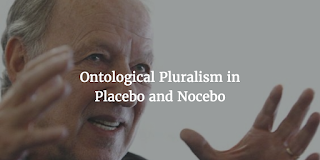 Explaining the position of ontological pluralism is both remarkably easy, and absurdly hard, all at once (which, I guess, makes sense for pluralism). It's easy because I come into this through William James' radical empiricism and Whitehead's rejection of the bifurcation of nature. The simplest way to explain James' radical empiricism is to say it refuses the distinction between primary and secondary qualities that we find in Locke. If experience gives us access to reality, than all experience is real. If you experience the German industrial noise band Einstürzende Neubauten as producing melodic and inspiring music, and I experience it as so much terrible noise, than both our experiences are real. They are both true. This is not simply the case of differing opinions dancing upon the solid ground of matters of fact, but rather affirming that we can have two mutually contradictory and equally true propositions about reality.  We can see something like this affirmation of experience in Whitehead, who contends, "Process is the becoming of experience," and the "principle must be repeated: that apart from the experiences of subjects there is nothing, nothing, nothing, bare nothingness" (Process and Reality, 166 and 167).

The usual objection is that ontological pluralism is simply relativism. My response to explain why it isn't really an issue of relativism is to point to the question of the placebo. The placebo, as I am sure you all know, is the thing you are given that makes you feel better or cures you, but the thing that made you feel better or cured you does not contain within itself the power that made you feel better. That is a somewhat intentionally awkward way of putting it, but the placebo is really complicated. Take a look at what Elizabeth Wilson describes in her recent book, Gut Feminism.


What the epigraph quote [Placebo (plah-se’bo) [L. “I will please”]. An inactive substance or preparation, formerly given to please or gratify a patient, now also used in controlled studies to determine the efficacy of medical substances] from The American Illustrated Medical Dictionary shows is that around 1951, as the clinical trial is materializing, the placebo is operating in two registers simultaneously: as a prescribed treatment (as outlined by Pepper), and as the no-treatment wing (the control group) of a clinical trial. This confusion, where a substance both treats and does not treat, is what I will exploit in this chapter (123).

We'll come back to this, but this duality between treatment and no treatment will be key for us. Wilson continues:


The Shapiros argue that prior to the 1950s physicians were usually dispensing placebos, knowingly or unknowingly. If these substances had any measurable effect on the patient, this was due to the powers of suggestion (the so-called placebo effect). Here, then, is another confusion that this chapter will explore: not only do placebos seem to treat and not treat at the same time, but inert placebos also seem to be able to be activated by the forces of persuasion. If an inert substance can be brought to action by suggestion, if a nondrug can become a drug under the sway of a clinician’s care, authority, paternalism, or attention, is there not a muddle (for my purposes, an appealing muddle) between the actions of body and mind? Perhaps the drug and the nondrug (physiology and suggestion) are working the same ontological ground? A third tangle now quickly appears: if the placebo is known to be a kind of sham treatment, why did it not go the way of leeches, trephination, and lobotomy? The strangest of the turns happening around 1951 is this: placebo ends up being folded inside the technology that was allegedly developing to weaken or eradicate it. These days, one of the markers of a robustly designed clinical trial is that it includes some kind of comparison between the drug and placebo [...] To add to the confusion in the literature, sometimes placebos are chosen not because they are inert, but because they mimic the adverse effects of the drug under study (the so-called active placebo). For example, in studying antidepressants, a placebo may be used that mimics the anticholinergic effects of these drugs (e.g., increased heart rate, decreased sweating, decreased gastrointestinal mobility, impaired concentration). This means that patients and doctors are less likely to guess the group (drug or nondrug) to which the patient has been assigned, thus protecting the double-blind protocol of the study and minimizing the forces of suggestion. The convolutions intensify here: use a placebo that is experientially indistinguishable from the drug in order to delineate whether that drug modulates experience more effectively than the placebo. There is a kind of logical peculiarity in such clinical trials where drug and placebo need to be more or less the same in order that we can tell them apart. My concern is not that clinical trials are incoherent or fruitless endeavors, but that there hasn’t been enough attention paid to how their capacity to differentiate between substances requires that those substances are intimately, mutually engaged (123-125).

So that is a big chunk, but I think Wilson is getting to some of the issues of "the bastard placebo." It is not clear if a placebo is treatment or non-treatment, it is not clear if a placebo works by suggestion of the physician, or by active use of whatever is going on with the placebo, and many other issues. But from the standpoint of explaining ontological pluralism, we can simplify the argument. If you are a patient, and you are given the placebo, and the placebo works, in what way can we say that the placebo didn't make you feel better? Did that not happen in reality? Is that not true? But what if you are working to create a drug trial, there is another mode and experience of the placebo. Then, of course, we can say the placebo does not work, it does not treat. So the mode within which you are engaging the placebo matters dramatically about whether it is true, or not (an aside, mode here is my way of trying to gloss James' notion of verification). Okay, so while the placebo is perhaps a strange example to think through, it is does not tend to raise more questions about pluralism than it answers, until, we begin to think of placebo's evil goateed twin, the nocebo.

So, recently I was dragged by friends to see Werner Herzog's new movie, Lo and Behold. In this movie, Herzog gives several minutes to suffers of electromagnetic hypersensitivity (EHS) These people passionately, with eyes filled by tears, describe the suffering of their sickness. They talk about living in faraday cages in the city, or living in their cars because the metal helps shield them. We meet them living in a town in the middle of Nowhere, West Virginia, because no radio waves are allowed in that area. And mostly they plead to be taken seriously. And that last plea is there because there is no scientific basis for EHS. The strong consensus of the scientific community is that EHS is an example of nocebo, or being harmed by an item that does not contain within itself the thing that harms you. But, just as the people who are made better by the placebo are made better, the people who are hurt by the nocebo are truly being harmed. They are honestly suffering. However, if you look online, you will find articles that engage in various forms of mockery of people suffering from EHS (this Wired article, for example, puts the word victims in scare quotes). I don't know what to do for people who suffer from EHS, or what it means to share a globally connected world with this roughly 1-3 percent of the population that suffers from EHS. It does strike me, however, that telling people to just get over it, or that it is "merely" in their heads is both absurd, and almost certainly cruel.

The problem with pluralism, but also its strength, is that we can no longer simply proceed as if we have the truth on our side. The model of politics, but also of the good life, that sees us as subjects of truth events that we then militate on behalf of is no longer really compelling from a position of ontological pluralism. What is instead the project of pluralism is building ways to cohabit this earth together. When Deleuze raises the figure of mediators, or Stengers the idea of the diplomat, or Boaventura de Sousa Santos propose the project of translation, they are all differently refusing the model of the militant spreading their truth, and instead presenting figures who are engaged in projects of negotiation, collaboration, revision, and persuasion. Ontological pluralism is a struggle because it is the opposite of relativism and liberal tolerance, and instead the "production of novel togetherness" where we are "drops of experience, complex and interdependent" (Whitehead, PR, 21 and 18).
Posted by Scu at 12:17 AM