Against Grief Shaming: Hume and the making of sympathy 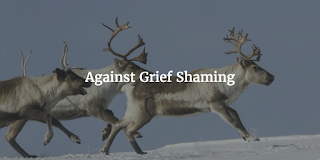 So, recently 323 reindeer died by lightening in Norway. Maybe you, like me, saw this on your social media feeds. I had several friends who are not into animal activism obviously sadden by this mass death of reindeer. But of course, certain people in animal rights circles immediately pointed out how hypocritical it was to mourn for these reindeer, but not be bothered by the deer who routinely hunted and killed here. The usual cited number is about six million white tailed deer are killed by hunters annually in the United States. So if you are sad about 323 reindeer dying, you should be devastated by the millions of deer killed every year. This isn't just about reindeer, either. Bigger examples occured after the killing of Cecil the Lion and Harambe the Gorilla. In each case we have large number of people who are not concerned about animal rights issues, suddenly being outraged or sadden by the deaths of these animals. Part of this, of course, is simply the issue of charismatic megafauna (and Jamie Lorimer's work here is canonical for good reason). But I want to focus on tendency to engage in a kind of grief shaming that certain parts of the animal rights community tries to push. While I have focused in the past on how mourning other animals is denied and unrealized in our present world, I want to briefly turn our attention to this inversion in which certain animal activists say that the selective mourning of animals is illegitimate. I am both very sympathetic to this claim, but I want us to think of trying to move in a different direction.

In order to rethink what is going on with the selective mourning of other animals, I want us to quickly think about the early modern thought experiment of the state of nature. So, if you remember your Hobbes and your Locke, the problem with the state of nature is that everyone could kill each other, or could steal from each other, and there could therefore exist no security or trust. So we engage in a social contract, where we cede part of our freedom (like my freedom to kill and steal) to the civil society or the sovereign. By ceding those bits of our freedom, we get security and trust. Now, Hume found this argument kind of strange. After all, we are born as atomistic individuals like you think reading Hobbes and Locke, but rather we are born into families. And however messed up those families were, we mostly had security and trust within them. For Hume, this changes the political and ethical project. It is no longer how do we cede part of our freedom for the social contract, but rather, how do we overcome the "inequality of affections"? To put it another way, the issue is not we are too ego-bound, but that our sympathies are too limited, too partial, too tribal. The political question is no longer how to limit the egotistic individual, the political question is how to create and build the institutions that can extend our sympathies. As Deleuze glosses in Empiricism and Subjectivity:


In this sense, the idea that Hume forms of society is very strong. He presents us with a critique of the social contract which not only the utilitarians but also the majority of the jurists opposed to “natural law” would have to take up again. The main idea is this: the essence of society is not the law but rather the institution. The law, in fact, is a limitation of enterprise and action, and it focuses only on a negative aspect of society. The fault of contractual theories is that they present us with a society whose essence is the law, that is, with a society which has no other objective than to guarantee certain preexisting natural rights and no other origin than the contract. Thus, anything positive is taken away from the social, and instead the social is saddled with negativity, limitation, and alienation. The entire Humean critique of the state of nature, natural rights, and the social contract, amounts to the suggestion that the problem must be reversed. The law cannot, by itself, be the source of obligation, because legal obligation presupposes utility. Society cannot guarantee preexisting rights: if people enter society, it is precisely because they do not have preexisting rights. We see clearly in the theory of promise which Hume proposes how utility becomes a principle opposed to the contract. Where is the fundamental difference? Utility is on the side of the institution. The institution, unlike the law, is not a limitation but rather a model of actions, a veritable enterprise, an invented system of positive means or a positive invention of indirect means. This understanding of the institution effectively reverses the problem: outside of the social there lies the negative, the lack, or the need. The social is profoundly creative, inventive, and positive. (45-46)

This means that the issues of grief over reindeer and named lions and gorillas is a classical Humean problem, that people's sympathies are too partial. I worry that pointing out hypocrisy is a way of telling people to have less sympathy. I do not clearly understand how to build the institutions to extend people's sympathies, but we have to remember when we engage, to engage at that level. This project, therefore, should be seen as a kind of extension of the work of feminist ethics of care when it comes to animals (and here I would plug Lori Gruen's relatively recent book, Entangled Empathy, as an essential way of looking as what a project of empathy looks like with other animals and humans).

Ultimately, the issue is not that some people are hypocrites, or engage in "moral schizophrenia." The issue is that they are engaged in the same sort of partial sympathies that we all engage in one form or another. We all have times we engage in an inequality of affections that keep us from extending the moral community to where it should be. So, the project is one of building institutions (not just political, but also aesthetic and ethical, that is to say, cultural and affective) to extend our sympathies. What are the institutions, practices, and artifices we can create to overcome these limitations? What are the affects and the abstractions, the precepts and the concepts, we can multiply and circulate? How do we create a matrix that allows us to change and transform the vectors of desire? These are questions about what beings we are to become, what worlds we are to make.
Posted by Scu at 12:03 AM