Welcome to The Thinkery: Two Logoi Enter, One Logos Leaves 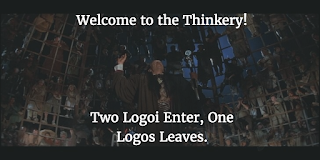 I am a professional philosopher, but I also have a long background in competitive academic debate, having both participated and coached it for many years. While I have taught more classes in departments of Philosophy, I have also taught many classes in departments of Communication Studies and Rhetoric. Now, except for the rather confused CV this has given me, it hardly seems worth mentioning. Except the feud between philosophers and sophists seems to have never ended for some. I know, I know, ever since Hegel invited the Sophists back to the party, one would have thought it was over. But again and again, we see a strange turf war between philosophers and sophists, wisdom and debate, truth and rhetoric.
Thus, Henry Sidgwick argued that the sophists were:


a set of charlatans who appeared in Greece in the fifth century, and earned an ample livelihood by imposing on public credulity: professing to teach virtue, they really taught the art of fallacious discourse, and meanwhile propagated immoral practical doctrines...they were there met and overthrown by Socrates, who exposed the hollowness of their rhetoric, and triumphantly defended sound ethical principles against their pernicious sophistries (originally quoted in Patricia O'Grady's "What Is a Sophist?" p. 12).

And here, check out this quotation of David Brooks, mostly quoting Robert George:


Read Plato's ''Gorgias.'' As Robert George of Princeton observes, ''The explicit point of the dialogue is to demonstrate the superiority of philosophy (the quest for wisdom and truth) to rhetoric (the art of persuasion in the cause of victory). At a deeper level, it teaches that the worldly honors that one may win by being a good speaker can all too easily erode one's devotion to truth -- a devotion that is critical to our integrity as persons. So rhetorical skills are dangerous, potentially soul-imperiling, gifts.'' Explains everything you need to know about politics and punditry (Originally cited in Boyarin's "The Scandal of Sophism").

We could be here all day if we continued to cite over the top accusations against sophists and rhetoricians, and on the general superiority of philosophy. But why are the sophists so hated? What vile crimes are they accused of?

This is the weird part, because so many of the terrible things about the sophists have not aged well. They are constantly charged with being foreigners. They are not citizens of Athens. That sort of xenophobia shouldn't carry much wait these days. Also, the sophists are accused of taking money for their teachings. I still hear this accusation made against the sophists. Often, awkwardly, by other people who accept money for their teaching. I mean I know lots of people who have moved to new cities in order to take pay and teach young people how to speak, write, persuade, think, and ponder morality and justice. Now, who is it that these sophists taught? Well, horrifically enough, they taught basically anyone who would have them. This trait is what led to Xenophon's Socrates to explain that the sophists are the same as prostitutes. This is part of a broader aristocratic mentality of thinkers like Plato and Xenophon, their belief that the only ones who should be taught are those who deserve to be taught. Against this view, the sophists forwarded the idea that training and practice could matter as much as human nature in terms of creating an engaged citizenry. One of the fragments we have of Protagoras makes this point, "Teaching requires natural talent (physis) and practice (askesis)." Furthermore, as Michael Gagarin notes in Antiphon the Athenian:


The Sophists were just as critical, both of earlier writers, especially the poets, and of each other. They also criticize speciﬁc institutions, such as the legal system. But unlike Heraclitus and other Presocratics, they do not criticize or belittle people in general for lacking intelligence or for having no comprehension. On the contrary, in the Protagoras, Protagoras defends the practice of allowing everyone a say on matters of public concern. Not all Sophists would go so far, but in contrast to the explicit elitism of the Presocratics, the Sophists tend to be more populist, criticizing primarily the views of traditional authorities, not those of ordinary people (p. 19).

I am laying all of this out so that you can understand that many of the attacks of the sophists were part of a broader tension around egalitarians and elitism, around cosmopolitanism and tribalism, and around secularity and religious beliefs. But all of this, you would be correct in saying, is not the real charge that allowed sophists and sophistry to be used as pejoratives to this time. Rather it is that the sophists practiced eristics and had no concern with the truth.

The idea that the sophists were unconcerned with the truth is certainly one of the odder claims made, concerning how often they wrote on it, and at least with what we have left, that they treated the truth as a positive value. Again, Gagarin:


Far more complex than their quest for correctness and precision is the Sophists' view of and attitude toward truth. Plato attacks them on this point, maintaining ironically that “Protagoras’s Truth is true to nobody” (Theaetetus I7Ic), that rhetoric deals in falsehood (Gorgias 458e— 459C, etc.), and that his predecessors honored probabilities more highly than truth (Phaedrus 267a, 272d—273c). Although both Protagoras and Antiphon wrote works entitled Truth, none of their preserved fragments explicitly discusses this subject. In their surviving works, however, the Sophists and orators consistently present truth as a positive value, even a primary goal, while recognizing that truth is often a matter of judgment rather than fact, and is often difficult if not impossible to determine (p. 28).

But, didn't the sophists seek to undermine the search of truth by making sure that bad arguments were more convincing? Isn't that the whole point of rhetoric? Didn't Protagoras say that he was going to make the worse argument appear to be the better? Well, not exactly.