As Marx tells us in the first volume of Capital, every beginning is difficult. And I've been having a devil of a time trying to figure out how to start us out with Kōjin Karatani's Isonomia and the Origins of Philosophy (Duke 2017, originally Iwanami Shoten 2012). For one, Karatani is something of an ambitious generalist, writing bold (and underdeveloped and under backed up) claims about anthropology, religious studies, philosophy, and political economy and statecraft in ways that we don't see as much anymore. For me, I am constantly going from being intrigued by his exciting schematization and insight, to going, "Uh, buddy, I don't think that's right." For another, Isonomia is something of a sequel to Karatani's even more ambitious, previous work, The Structure of World History: From Modes of Production to Modes of Exchange (Duke 2014, which is a substainally modified version of a book published originally Iwanami Shoten 2010). Well, less a sequel, and more that Isonomia was originally conceived as part of that book, but it became so long and involved it ended up becoming it's own book. I, of course, have not already read The Structure of World History (SWH), and I think if I had realized that Isonomia was based on that work, I might not have suggested we do a public blogging event. However, I have picked it up, and started reading it somewhat alongside Isonomia, and also Karatani provides a very short, and actually helpful, appendix of the theoretical argument in SWH so that you can jump into Isonomia by itself.  Okay, so Isonomia tries to answer the following question, why is it that "around the sixth century BCE, Ezekiel and the bibical prophets emerged from among exiles in Babylon; Thales emerged in Ionia on the coast of Asia Minor; Gautama Buddha and the Jain founder Mahavira appeared in India, and Laozi and Confucius emerged in China" (1)?  How can we understand this explosion of world wide philosophical thought? 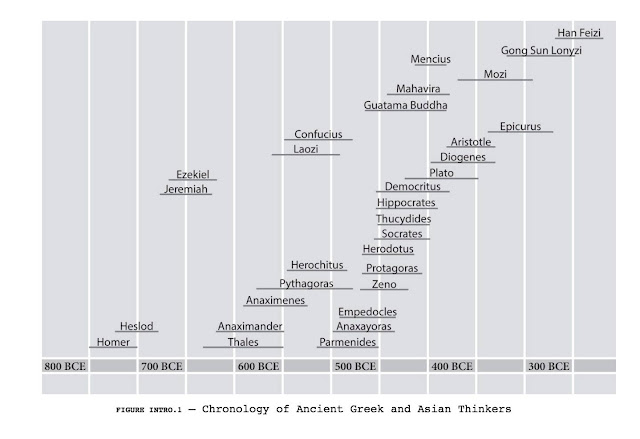 So against the normal narrative of the so-called Athenian Miracle, Karatani argues correctly that there are several different, and disconnected, strands of philosophy. So, why are all these things happening at once? It's certainly not because of a single intellectual tradition, or an emergent thinker who changes everything. It is also not, as Karatani points out, "straightforwardly based on socioeconomic history" (1). Now this brings us to Karatani's appendix.
In SWH Karatani challenges Marx's model of world history as being based on modes of production (this is not from a place of hostility toward Marx. Indeed, if you know of Karatani before these works, it was almost certainly from his work Transcritique, where he tries to synthesize Marx and Kant). Instead of seeing society defined by its mode of production, Karatani believes the controlling feature of a society is its mode of exchange. Karatani points out that when we hear mode of exchange, we tend to think of a capitalist commodity exchange. However, Karatani argues there are four different modes of exchange, of which the commodity exchange is but one mode. He labels them Mode A, B, C, and D. They work out this way:


Mode A  Reciprocity by gift and countergift
Mode B  Domination and protection
Mode C  Commodity exchange
Mode D  Mode that transcends A, B, and C (135)


Yeah, I like the specificity of Mode D too. In his defense, though, it's about as a good of a definition as Marx ever gave communism. The dominate mode of exchange ends up mapping onto all sorts of other features of society, such as the political structure of society. So mode A is the nation, mode B is the state, mode C is capital, and mode D is "X (Yet to Be Realized)" (137), though in SWH he also identifies Mode D with Kant's idea of the World Republic. And here in Isonomia, Mode D is also identified with the Dao. Why? Honestly not sure. BUT! it has something to do with each mode of exchange also mapping onto different structures of religion.
So Karatani goes on to identify animism and magic with Mode A (gift giving), transcendent gods and king-priests are associated with Mode B (domination and protection), in Mode C (commodity exchange) we get "a world god that transcends the old tribal gods and tutelary deities" (4). However, none of these represent a truly universal religion. Even the world god fails, because "the god would be abandoned if the empire were to be defeated" (4). A truly universal religion would be one that, unsurprisingly, would transcend the religions of of A, B, and C. As Karatani puts it, "universal religion is an attempt to recuperate mode of exchange A at a higher level, after it has been dissolved by modes B and C" (4). In other words, mode A of gift and countergift have a principle of "reciprocity and mutual support" that gets dissolved by Modes B and C. The question is, how do we go back to that part of A, while keeping all the universal parts of B and C? How do we get the mutual support, without the tribalism and the debt bonds of A? Or as Karatani asks, how do you get the religion of A without the magical phase of A? Karatani identifies in Confucius and Laozi two different responses to the dissolving of A. Confucius wants to just go back to Mode A, but the Dao represents an attempt to understand A on a higher level.
There are several points of this long discussion of universal religion, but the most immediate one is that it seeks to do away with the religion and philosophy divide. The idea that you have on one hand religious thinkers, and on the other, rational philosophers, just isn't there. And once you get rid of the notion of the divide between philosophy and religion, so many of the philosophers are seen as prophets of example. They seek to produce a way of living that calls forth, to use a Deleuzian expression not in Karatani, a new people and a new earth.


The prophet does not know how to talk, God puts the words in his mouth: word-ingestion, a new form of semiophagy. Unlike the seer, the prophet interprets nothing: his delusion is active rather than ideational or imaginative, his relation to God is passional and authoritative rather than despotic and signifying; he anticipates and detects the powers (puissances) of the future rather than applying past and present powers (pouvoirs). (ATP 124, emphasis in original).


Universal religion, therefore, is a task of the philosophical project that seeks to produce Mode D of exchange. The mode that is yet to be realized. And with that, philosophy is not birthed in Athens as the foundation of the West, but rather in a global context of people responding to shifts in modes of exchange.

***
Further thoughts. I really like the argument against the Greek Miracle, which will be one of the central conceits of the rest of the book, and I am sure I will have more to say. But it seems odd that he ignores here, for example, Egyptian philosophy and thought, which we know was relatively advanced centuries before Plato. Joseph, who I know teaches a bit of Egyptian philosophy in his Ancient Philosophy class might have more to say here. Also, so much of what I have written is produced by assertion with very little argument or examples by Karatani, which is terribly frustrating. Hopefully as I read more of SWH I will know if he just does the arguments there, or if this is part of a broader style of writing. But, for example, when I posted the above graph on facebook a couple of weeks ago, a few people pointed out the dates for some people were, at best, idiomatic, and at worse flat out wrong. It's this sort of lack of attention to detail that bothers me for some of his boldest and biggest claims.
The next official post will be on Thursday over chapter one, and will be at AnotherPanacea. Though Joseph and Josh might respond to the intro and appendix as the spirit moves them. If they do, or I see another blog doing so, I will make a post linking to that work.
Posted by Scu at 9:49 AM