There are three important books coming out in Critical Animal Studies that I have pieces in, and they are all awesome collections. There is a chance that later on I might promote each of them more. 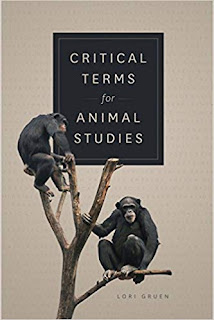 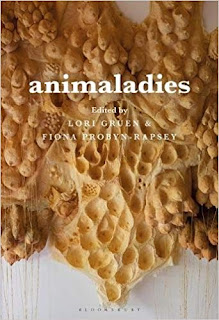 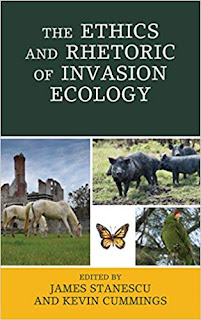 Lastly, the volume on The Ethics and Rhetoric of Invasion Ecology, that I co-edited with Kevin Cummings, has been released in a paperback version. With that, the digital list price has also decreased, so that is a little over $19 on amazon right now. While I am obviously biased, this is a great collection of essays.
Table of Contents:
Introduction: When Species Invade
James K. Stanescu and Kevin Cummings
1.Beyond the Management of Pe(s)ts: Zoomimicry in an Age of Catastrophic Environmental Change
Matthew Calarco
2.Alien Ecology, Or, How to Make Ontological Pluralism
James K. Stanescu
3.Guests, Pests, or Terrorists? Speciesed Ethics and the Colonial Intelligibility of “Invasive” Others
Rebekah Sinclair and Anna Pringle
4.The Judas Pig: How we Kill “Invasive Species” on the Excuse of “Protecting Nature”
Vasile Stanescu
5.Spectacles of Belonging: (Un)documenting Citizenship in a Multispecies World
Banu Subramaniam
6.Welcoming the Stranger: Coercive Reproduction and Invasive Species
Kelsey Cummings and Kevin Cummings
7.Paradise and Warfare: Aldo Leopold and the Rhetorical Origins of Restoration Ecology
Casey Schmitt
8.Rooting for the Unrooted: Invasive Species and Uncanny Ecosystems in Peter Carey’s “Exotic Pleasures”
Mica Hilson

This theoretically nuanced, scientifically informed, and historically and culturally sensitive collection delves into the logics of extermination at a crucial time. As our activities create more and more refugees, both human and nonhuman, the rhetoric of invasion has unprecedented power that calls us to ask critical questions. The essays in this volume, written by philosophers, geographers, environmental humanities scholars and others, provide a necessary intervention that will help us grapple with the complexities of ecological and social harms created by the eradication of individuals and species deemed non-native.
— Lori Gruen, William Griffin Professor of Philosophy at Wesleyan University and author of "Entangled Empathy: An Alternative Ethic for Our Relationships with Other Animals"

This collection refreshingly approaches the issue of invasion ecology from the urgently needed perspectives of ethics and rhetoric. Each of these essays questions the received idea of an "invasive species" as a morally compromised destroyer of a privileged "ecosystem," a category with an inherent moral and aesthetic stamp of approval. The essays expose the rhetorical stances of invasion, migration, and reproductive futurism across species boundaries, indicting the nativist and colonialist discourses that sustain the oppression and abuse of human and nonhuman animals alike. The stories we tell when we separate invaders from the ecology they supposedly invade draw on deeply ingrained discourses of nativism and colonialism. These essays do not simply take those stories apart: each one tells new, more inclusive stories that can structure more inclusive, generous, and ethically engaged ecosystems.
— Robert Stanton, Boston College

This volume introduces a broad set of valuable, insightful and critical interventions into the field of ‘invasion ecology’ that one hopes will be engaged with by both conservation biologists and the wider policy sphere in order to provoke debate and contest current practice.
— Richard Twine, Edge Hill University
Posted by Scu at 12:42 PM