How to think the eradication of animal cultures. 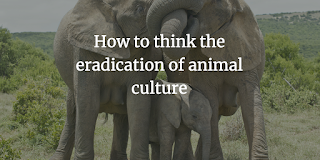 “Sometimes in the rush to conserve the species, I think we forget about the individuals,” says Cat Hobaiter, a primatologist at the University of St. Andrews. “Each population, each community, even each generation of chimpanzees is unique. An event might only have a small impact on the total population of chimpanzees, but it may wipe out an entire community—an entire culture. No matter what we do to restore habitat or support population growth, we may never be able to restore that culture.”
[...]
Other animals are also likely losing their ancestral knowledge at our hands. When poachers kill an elephant matriarch, they also kill her memories of hidden water sources and anti-lion tactics, leaving her family in a more precarious place. When moose and bighorn sheep were exterminated from parts of the U.S., their generations-old awareness of the best migration routes died with them. Relocated individuals, who were meant to replenish the once-lost populations, didn’t know where to go, and so failed to migrate. These discoveries mean that conservationists need to think about saving species in a completely new way—by preserving animal traditions as well as bodies and genes.


So, for years now I have been using the language of culture (and cultures) to talk about other animals. They do, indeed, have cultures, if by that we mean traditions and habits that are unique to particular groups and get taught and passed down over time. While controversial, I think the rejection that many nonhuman animals have culture is simply an example of Frans de Waal has called anthropodenial, the tendency to deny characteristics we associate with only humans to other beings. My question is, how do we talk about the sorts of things I quoted above?

On the one hand, if this was something humans were doing to other humans, the language of colonialism and genocide seem to be in order. This was my intuition when I first started trying to talk about these things. It did not go well. And now I generally think I was in the wrong. Partially because it is too divisive, and terminology that begs to be misunderstood is probably bad terminology. And concepts that seem to offend the very people who you might hope to convince is bad at persuasion, no matter how personally satisfying. But also, as I tried to explain in my article "Beyond Biopolitics" a few years ago, I find these analogies to be insufficient at doing the conceptual work. In my article I linked to above, I explained some of the issues I have with comparing the term genocide or murder to what happens to animals in the factory farm. But here, with the destruction of cultures of other animals, is colonialism the right term?

It is clear that there is a link between colonialism and anthropocentrism. One need only look at the work of, say, Sylvia Wynter, to begin to understand how the construction of "Man" is meant to make disposable or trainable large swaths of the human population. And there is the rhetoric of colonizers, the way they deploy a language of hunting or culling nonhuman animals to justify their world historical crimes against those they sought to colonize. Then there are the material connections between colonialism and other animals. There is the history of "exotic" animals being forcibly relocated to the metropole, often as a way to glorify the power of the colonial center, and as entertainment to the colonizing people. There is the long history zoos displaying both nonhuman animals and humans from other cultures. There is the history of game hunting as being an element of the expansion of imperialism, and as I have argued there is a continued logic of hunting power and xenophobia that guides our policy to non-native species. And this leads one to agree with Dinesh Wadiwel that there is a war against animals. So I am not saying that there is no relationship between colonialism and our treatment of other animals. Indeed, any animal scholar would be greatly enriched by studying decolonial philosophy. And if for some reason you have to choose between reading Agamben and Wynter, read Wynter.

However, it is hard to argue that colonialism fully captures what is going on here. If nothing else, it is unlikely that the theoretical insights produced by decolonial scholars will easily map onto how we are to respond to this eradication of animal cultures (even if, as Juno Salazar Parreñas shows, there is much to be learned from decolonial insights into the conservation of other animals). What we need to do, and what I am sure some of you are already doing, is to develop a vocabulary and conceptual apparatuses that draw insights from scholarship on colonialism and genocide studies, while doing the work that is unique to animal studies. We need something that exists between the language individual animal rights and suffering and the language of extinction. And from there, we can begin to navigate not only better conservation practices toward other animals, but also one that begin thinking and responding to the cosmopolitical struggles of when animal cultures run up against human cultural practices.