The Decarbon Turn: On the Green New Deal and Shared Socioeconomic Pathways.

For the last several years in response to questions of if I am a liberal or a lefty, a moderate or a radical, a capitalist or a socialist, I have taken to responding that I am an environmentalist. It is an annoying answer, but I think it is important to reorient my political goals and strategies. Furthermore, it conforms to my intuition that no matter how still important the political philosophy of the 19th century is, it perhaps only awkwardly reflects the battle lines of the 21st century. It is with this in mind that I want to talk about the Green New Deal (GND). 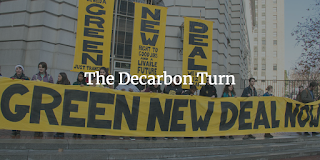 The Green New Deal promises to wed together social justice with environmental progress. It seeks to support a more economically egalitarian society with one that is rapidly decarbonizing. Such a move is already facing the usual objections. This recent editorial from the editorial board of the Washington Post is one example, where the claim is that all the social policy aspects of the Green New Deal are distractions from the more important environmental aspects. Others have defended the GND by pointing out this is an emergency, and that the GND seeks to shake up the political landscape by exciting people with social policy so they support the environmental policy. And that is not a bad argument. But what seems to be missing from this debate is that the social policy of the GND might actually be good environmental policy, and not just good politics.

In the most recent IPCC Report on Global Warming of 1.5°C, we were introduced to the idea of Shared Socioeconomic Pathways (SSPs). SSPs were not part of the executive summary of the IPCC report, and therefore have mostly not been talked about. However, they are an increasingly important form of complex integrated assessment models, which allow researchers to pose what if questions and determine how policy or societal changes might effect global warming. As Daniel Aldana Cohen explains:


Prior to the latest report, the IPCC projected future scenarios based on skeletal, technocratic models of energy, land use, and climate. They represented climate politics as being like a dashboard with a few dials that engineers could turn—a little more renewable energy here, a touch less deforestation there. In contrast, the SSPs imagine different possible climate futures in terms of realistic clusters of policy decisions, which in turn affect emissions, land use, and how the impacts of extreme weather are felt.

This feels obvious, but needs to be underlined. It is not simply policies targeted toward reducing Greenhouse emissions or increasing renewable energy that matter, but also larger questions about how we organize society also matter for global warming. Shared Socioeconomic Pathways tries to capture how societal decisions change global warming and resiliency.

In the most recent IPCC report, there are five SSP scenarios (future reports will probably feature more). Here they are in some detail:


SSP1 Sustainability – Taking the Green Road (Low challenges to mitigation and adaptation)
The world shifts gradually, but pervasively, toward a more sustainable path, emphasizing more inclusive development that respects perceived environmental boundaries. Management of the global commons slowly improves, educational and health investments accelerate the demographic transition, and the emphasis on economic growth shifts toward a broader emphasis on human well-being. Driven by an increasing commitment to achieving development goals, inequality is reduced both across and within countries. Consumption is oriented toward low material growth and lower resource and energy intensity.SSP2 Middle of the Road (Medium challenges to mitigation and adaptation)
The world follows a path in which social, economic, and technological trends do not shift markedly from historical patterns. Development and income growth proceeds unevenly, with some countries making relatively good progress while others fall short of expectations. Global and national institutions work toward but make slow progress in achieving sustainable development goals. Environmental systems experience degradation, although there are some improvements and overall the intensity of resource and energy use declines. Global population growth is moderate and levels off in the second half of the century. Income inequality persists or improves only slowly and challenges to reducing vulnerability to societal and environmental changes remain.SSP3 Regional Rivalry – A Rocky Road (High challenges to mitigation and adaptation)
A resurgent nationalism, concerns about competitiveness and security, and regional conflicts push countries to increasingly focus on domestic or, at most, regional issues. Policies shift over time to become increasingly oriented toward national and regional security issues. Countries focus on achieving energy and food security goals within their own regions at the expense of broader-based development. Investments in education and technological development decline. Economic development is slow, consumption is material-intensive, and inequalities persist or worsen over time. Population growth is low in industrialized and high in developing countries. A low international priority for addressing environmental concerns leads to strong environmental degradation in some regions.SSP4 Inequality – A Road Divided (Low challenges to mitigation, high challenges to adaptation)
Highly unequal investments in human capital, combined with increasing disparities in economic opportunity and political power, lead to increasing inequalities and stratification both across and within countries. Over time, a gap widens between an internationally-connected society that contributes to knowledge- and capital-intensive sectors of the global economy, and a fragmented collection of lower-income, poorly educated societies that work in a labor intensive, low-tech economy. Social cohesion degrades and conflict and unrest become increasingly common. Technology development is high in the high-tech economy and sectors. The globally connected energy sector diversifies, with investments in both carbon-intensive fuels like coal and unconventional oil, but also low-carbon energy sources. Environmental policies focus on local issues around middle and high income areas.SSP5 Fossil-fueled Development – Taking the Highway (High challenges to mitigation, low challenges to adaptation)
This world places increasing faith in competitive markets, innovation and participatory societies to produce rapid technological progress and development of human capital as the path to sustainable development. Global markets are increasingly integrated. There are also strong investments in health, education, and institutions to enhance human and social capital. At the same time, the push for economic and social development is coupled with the exploitation of abundant fossil fuel resources and the adoption of resource and energy intensive lifestyles around the world. All these factors lead to rapid growth of the global economy, while global population peaks and declines in the 21st century. Local environmental problems like air pollution are successfully managed. There is faith in the ability to effectively manage social and ecological systems, including by geo-engineering if necessary.

We worryingly seem to be headed toward the worst of all possible worlds, SSP3, or the regional rivalry. But let's bracket that concern, and focus instead on both SSP1.

SSP1, or Sustainability, is pretty heartening. It paints the picture of both a more economically egalitarian world and a more environmentally sustainable world. Sound familiar? And this pathway is the one that currently the social scientists working on climate change think would be the best for fighting global warming. And this shouldn't be surprising. We know that, for example, increase in women's education and access to healthcare are often key drivers for decreasing population growth. We know that rich people produce more greenhouse gases, regardless of their environmental commitments. And not only do these social policies make mitigation easier (that is, decreasing how much the planet will warm), it also improves adaptation (that is, how well we can respond to warming. Cohen again:


For instance, at two degrees Celsius warming, in an SSP 3 world, between 750 million and 1.2 billion people would be severely exposed to climate-linked extreme weather, according to a 2018 study discussed in the IPCC report. In contrast, the IPCC reports, under the SSP 1 scenario, well under 100 million people would be hard hit by extreme weather at the same level of warming.

So, in short, the Green New Deal has the chance to not just be good environmental politics and good social policy, but to also have social policy that is good environmental policy. But there are, of course, still worries. Look now as SSP5. It describes a world of economic egalitarianism based fossil fuel development. Not all good social policies are going to be good environmental policies. It is important, as the Green New Deal becomes fleshed out, that the environmental realities guides, as much as politically possible, the social policies. We need to probably be agnostic on what kinds of zero-emission energy to invest in, and we have to be serious about carbon capture. We need to avoid being overly nationalistic in our economic growth, and think of how to adapt SSPs for national and local decisions. There is no reason to believe, though, that any of these missteps have to take place in finalizing the Green New Deal. Right now, the important thing is pushing for its reality. And with that, arguing fully that the social policy is part and parcel of the environmental policy, and vice versa. The Washington Post Editorial Board is not just wrong politically, they are wrong on policy grounds. They are wrong because they have not kept up with the mainstream developments of what are the best policies for fighting global warming. And the Green New Deal, rather intentionally are not, is exactly where we need to be.
Posted by Scu at 1:48 PM