The dialectical position of the midwest 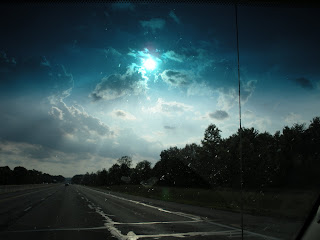 In my last post I lamented the poor veg options on my drive along US I-90. I've been thinking more about how "the midwest" functions as a concept in a discourse of America and how its rhetorical use relates to its material conditions.

The midwest usually exists in writing not as an in-itself but as a foil for cultural production. The coasts produce culture; the center produces grain and meat. The center is a means, then, and the coasts are its end. In terms of travel, it is also an area through which one travels, not to which one travels. It is a geographic exemplum of Hegel's negativity, that zone through which the truth must travel to continue to become itself against the force of history.

Now, it is absurd to say that the geography of the North American continent and the tendencies of population centers to condense around waterways is the effect of a cultural desire to have a physical representation of a travel-oriented culture (the cult of speed in Virilio's analysis). Nor do I think we should naturalize the peripheralization of the midwest--because it is distant, because it lacks oceanic access, because it is agriculture friendly and often harsh--because we can see in any number of places that discourse goes beyond objective difference to make the midwest more alien, more mocked, and more feared than it need be.

What seems to be the truth to me is that there is a convenient overlap between the ritual of driving through the west, a culture of speed and intermediacy, an aesthetics of the Quest (for America, for national character), and the geographic existence of a vast stretch of land that is conducive to agricultural use. America (and beyond) definitely relies on the productive capacity of the "amber waves of grain" but benefits equally from the aesthetic discourse that has arisen from the outsider's attempt to make sense of this region. Ultimately the west creates raw materials in two sense: the food that fuels persons elsewhere, and the sense of an incompletely articulated project of nationhood that drives the need for cultural production by coastal outsiders.
Posted by greg at 6:19 PM