This is a few months old but I just saw it and thought it might be useful for discussion. 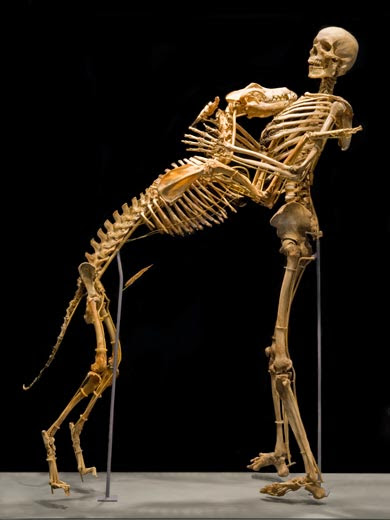 You can get the article from the Washington Post. I think they also have the photo that served as the model, Dr. Krantz and Clyde when living, also.

1). It reduces humans and nonhumans into a single discourse, bone.

2). Similarly, I like that they are defaced because it poses uniqueness or personality as a question for speculation. Both dog and human are subject to the imaginative process by which the other appears as an ethical subject for the ego. Conversely, taxidermy would make this really creepy--perhaps more interesting as art, but would further postpone a shared discourse between humans and nonhumans.

3). They are not hunting or performing some other anachronistic--and inevitably ideological--activity. They are communicating, representing human and nonhuman accurately as affect-information workers, and so promoting consciousness of the real class solidarity that exists across species lines today.

4). They look like they are playing in the (Schillerian?) sense of reciprocally forming the terms of their engagement without prior determination of or interest in the outcome. This is how Agamben, working with Benjamin and against Schmitt, works to construe politics--not as an inviolable structuralism of friend and foe, but as a processual determination of the paradigm through which one sees collectivity (meaning that friend v. foe is only paradigm and Schmitt's naturalization is a strategy to secure a particular configuration of power, rather than the explication of an inevitable social order that Schmitt wants it to be).