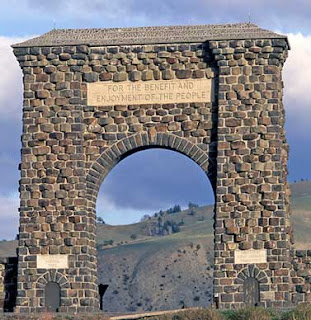 "For the benefit and enjoyment of the people"

(The above image comes from recreation.gov, an address which I imagine would have been the setting for a dystopian sci-fi novel if Foucault had teamed up with Dick. Enjoyment makes you free).

I've been working hard today to schedule my family's (myself, my wife, and our two dogs) move across the country by way of a stop off in Montana. For financial and other reasons we have been scheduling most of our nights at campsites, as well as trying to pay visits to America's natural wonders. Woe unto us! The National Park Service is ridiculously discriminatory against canines, prohibiting them from any areas other than line-of-sight from parking lots. What the fuck. I understand leash laws, but total prohibition is unreasonable--a dog on a leash can do no more damage to its environment or others than the negligence of its owner allows.

The obvious irony, which I don't have the energy to deconstruct after too many hours on google maps, is that National Parks are supposed to promote the human-environment connection but they do so by a very specific prohibition that prevents as many as possible unscripted animal events as possible. So instead of touring Yellowstone on foot with my family, we'll maybe take a four wheel cruise along the periphery and head back to Bozeman. Or I could incarcerate the dogs for the day so I can get closer to nature.

The national parks like to tout themselves as "America's best idea." As long as Guantanamo Bay is open I certainly wouldn't say it's our worst, but not by much. Actually, it's a great idea, but the execution is the hell of it.
Posted by greg at 9:56 PM